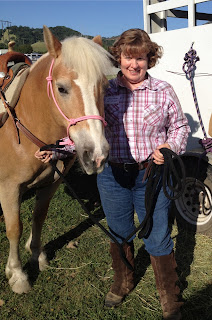 Today was an “interesting” day. But first, I have to tell you the coolest thing! The cute paint gelding in the pen next to mine – my new BFF – I found out he lives at the same ranch I do! We are neighbors at WoodMyst Farms! His name is Jessy and his owner told Martha we can still visit each other when the clinic is over. I am SO happy!

Martha and I were talking after class today and we each chose a “challenge” and a “win” for today. My biggest challenge was the spectators who were sitting high along the top of the fence and in the judges’ stand and the announcers’ booth. I’d never seen people sitting up that high above me before and I kept thinking about the mountain lions my mom used to tell me will jump onto a horse’s back from high above. Martha kept telling me they were people, not mountain lions, but I had to stop several times and look, just to be sure she was right. I thought people were supposed to have their feet on the ground, so they looked a little weird up above me.

My “win” for the day is I rode along the two arena fences lined with lots of spectators sitting in chairs. Martha told me, “Don’t worry, those are 500 new friends” and I said, “Cool! New friends!” I am so proud because in the first two days of the clinic I have not spooked one time! I am learning to control my feet and not run away when I feel startled. I feel like I am becoming more confident and that feels good!

Martha told me her biggest challenge today was a riding drill where she was supposed to reach her inside hand and rein every time my inside front foot left the ground in a circle. Let me tell you – that was a FAIL. It would have been really funny if she had not been so frustrated. Still, I was laughing. She was really trying but she did not understand how to do it! I knew how to do it, but she sure didn’t! After dinner tonight, she and I went back into the arena to see if she could figure it out, and she did. In class today, Buck said, “At first this drill will make you want to get drunk.” I don’t drink, but I could see his point. I heard a spectator tell Martha, “The entire arena looked like a giant can of worms.” He-he! I don’t think it’s good when the arena looks like a giant can of worms.

Martha’s other challenge today was backing me in a circle on the ground. Now, I already KNOW what a circle looks like! But please tell me, why would a horse EVER want to back in a circle? I do not know why. Sometimes Buck asks us to do things that do not make sense to me. But I am only a horse, so I do what he says even though I don’t understand it. Martha could not figure out how to get my feet to back in a circle. She and I kept looking at the ground together to see how the circle looked and honestly, all either of us ever saw was a messy pile of dirt. Never saw a circle today!

Something else really cool happened today (besides finding out Jessy is my neighbor!). I feel like Martha and I might become really good friends. Martha and I both lost our best horse friend in the past couple of years. Martha’s very best horse friend, Nick, died two years ago and she told me she still feels very sad when she thinks about him. My best friend, Classy, died last year, and I still miss her. But after the clinic today, I felt like maybe Martha and I could really become good friends and have adventures together, like she told me she and Nick used to have. That made me smile because I think you have figured out by now, I am all about making friends! Gotta get ready for class now!
Posted by Martha McNiel at 11:38 PM